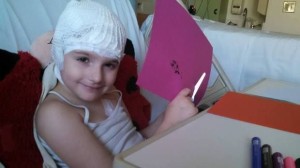 Dana Ulrich feels conflicted about her status as an outspoken advocate for medical marijuana.

Lorelei, her 7-year-old daughter, suffers from 700 seizures every day, down from 1,400 thanks to a battery of medication. The one saving grace is that her other diagnoses — including autism and sensory processing disorder — mean she likely isn’t aware that her childhood is any different from that of her peers.

For nearly two years, Dana, a mother of three, has been calling lawmakers, speaking at rallies and appearing at events like the Pennsylvania Farm Show. Her family has become the face of a movement to give patients like Lorelei access to marijuana in order to ease their symptoms and improve their quality of life.

“I can’t just sit at home and hope that somebody else wins this fight for us,” Dana says, as her son Lucas plays in the background at her Reinholds, Berks County, home.

But Dana, who regularly talks with parents like her from across the state and country via the Internet, knows many quietly administer cannabis oil to their children. They risk prosecution, something Dana can’t do because of the increased scrutiny she’s brought to her family and her cause.

“Every time I see her have one of her bigger seizures, I think: ‘right now, I could be giving her cannabis oil to stop this seizure’,” she says, “and I can’t because, if I get caught, I could lose my children and I’d be going to jail.”

Last year marked a disappointing defeat for medical marijuana advocates, as legislation passed the state Senate only to die in the House without a vote. Since then, however, a supportive governor has taken office along with new leadership in both chambers of the General Assembly. More than any prior year, it appears that 2015 will be the year medical marijuana comes to Pennsylvania.

The issue has made unlikely allies of two lawmakers: Sens. Mike Folmer, a Republican from Lebanon County, and Daylin Leach, a Democrat from Montgomery County.

“I can’t just sit at home and hope that somebody else wins this fight for us.” Dana Ulrich

“The credit has to go to Sen. Folmer,” Leach said. “If it was just me, people would say, ‘That’s just Daylin. He’s a crazy liberal. Sen. Folmer has all the conservative credentials.”

Folmer said the bill’s supporters plan to continue educating their colleagues as it makes its way through the Legislature. By the time it comes up for a vote, he said, the hope is that any objections can been overcome.

“It was labeled as a liberal issue — being soft on drugs — but that’s not the case,” he said. “It’s not about the high. It’s about compassionate access to quality medicine that can help folks. It’s about adding one more arrow to their quiver to help them fight as their doctors best see fit.”

Last year, House Speaker Mike Turzai, R-Allegheny, opposed the medical marijuana bill, saying that legalization should come down from the federal level. Medical marijuana could have a clearer path there now that the new majority leader is David Reed, R-Indiana, a co-sponsor of the House version of the bill.

“I’m optimistic that it will make it to my desk,” he said, during his tour of the Farm Show. “The question is in what form.”

Of course, this is not the first year that supporters envisioned the bill’s passage.

At this time last year, Dana Ulrich said, she expected to be able to use cannabis oils to treat Lorelei within the year, but instead she saw the bill sustain one crushing blow after another.

“The medical cannabis bill we had was really severely cut,” she said. “That was devastating for us to see what was a very good bill now being demolished.”

Leach said the new bill would fix a key problem with last year’s legislation. At the time, several amendments made prior to the Senate vote limited the number of conditions that could qualify for treatment.

“My preference, and this is the subject of ongoing discussion, is not to lay out specific conditions,” he said. “We’re not doctors; we don’t know.”

Sen. Daylin Leach mans a booth in support of medical marijuana on the fifth day at the Pennsylvania Farm Show.SEAN SIMMERS

The goal, Leach said, is to have a team of medical experts determine the parameters of the program, from which patients qualify for treatment to what form of cannabis should be administered. For example, he said, doctors typically advise cancer patients to inhale the medication while those with seizures typically receive it via oil under the tongue.

“I think, at the end of the day, we’ll have a much better bill than what we passed in the Senate,” he said.

Supporters have been ramping up outreach in anticipation for the bill’s reintroduction, which is now named Senate Bill 3. At the Farm Show, for example, supporters had a booth where they took names and email addresses of supporters who can be called upon later to encourage their legislators to pass the bill.

“We’d like to pass this unanimously,” Leach said. “There’s no rational reason for people to be suffering, which is why we passed it 43-7 in a bipartisan fashion last time.”

Dana Ulrich said it’s important to give lawmakers a human face for the legislation.

One of the first volleys in the renewed push for medical marijuana will come at a press conference Tuesday on the steps of the Capitol Rotunda. Dana plans to be there.

Since she was diagnosed at 22 months, Lorelei has been on 18 different seizure medications with varying degrees of effectiveness. Those prescriptions come major side effects, ranging from low platelet counts — which could impede blood clotting — to life-threatening rashes to psychiatric reactions like self-harming behaviors. Some of them also resulted in withdrawal symptoms once Lorelei was taken off the medication.

“When you see people withdrawing off drugs in rehab, that’s what these kids go through,” she said. “They go through more than a lot of people know and understand.”

Dana said she’s hopeful that cannabis could help control Lorelei’s symptoms with fewer of those adverse side effects. The compassion that legislators have shown to her cause — she speaks with Folmer several times a week — is heartening, she said.

“This year, I’m just darn optimistic,” she said. “I really feel like this year, we stand a very, very good chance.”