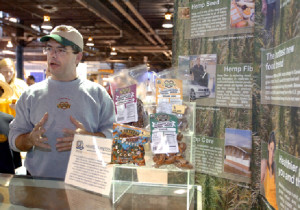 If state Sens. Mike Folmer and Judith Schwank have their way, the plant that lent its name to East and West Hempfield townships could once again grow here.

More than a dozen states permit such production, the memo says, and the proposal would add Pennsylvania to those ranks by establishing an industrial hemp licensing board within the Pennsylvania Department of Agriculture.

Schwank, who represents Berks County, is optimistic about the bill’s chances. It will take a while to figure out how to grow, harvest and market industrial hemp appropriately here, she said, and creating a licensing board is just the first step in that process. She also thinks the debate about legalizing medical marijuana here has raised the public awareness that industrial hemp “has none of the qualities that medicinal cannabis would have.”

Currently it’s legal to use industrial hemp here but not to grow it, which means that Columbia resident Shawn House has to import the starring ingredient in his Hempzels food products from Canada. He would like that to change.

Beyond the fact that locally grown industrial hemp would likely increase his choices and lower his prices, House says, he just thinks its absurd that what he considers an agricultural commodity crop is treated like a drug issue.

House has been a hemp advocate for so long that he has long since stopped making predictions, he says — but the timing would be great if Pennsylvania did give growing industrial hemp the green light this year. This will be his tenth year selling hemp products at the Pennsylvania Farm Show — which runs Jan. 10 to 17 — and he’s going to mark the occasion by adding frozen soft pretzels to his line of retail offerings.

“For nine years we’ve been selling them heated; now people are going to be able to take them home frozen,” House said, adding that he’s working to make them available in grocery stores as well. “ I’m hoping this will be my year.”