Wonderful Article about the Town Hall from The Lebanon Daily News 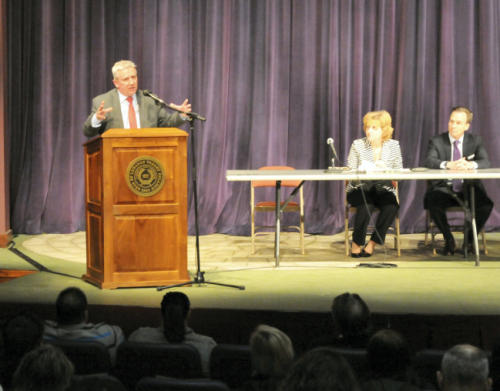 “Ladies and gentlemen, this is about education, and that’s what we’re hoping to do for you this evening. To break and bring down any of the fears and trepidations you may have when you hear the word ‘marijuana’,” said Sen. Mike Folmer (R-48) at the outset of a town hall meeting Wednesday night.

Speakers at the meeting included fellow senators Daylin Leach, cosponsor of both bills, and Judy Schwank, sponsor of SB50 and cosponsor of SB3, as well as Lt. Gov. Mike Stack.

Folmer introduced the discussion on medical cannabis with a brief explanation of the bill.

“This is about alternative medication. This is about giving doctors, giving patients one more arrow in their quiver to fight whichever disease it is they may be fighting,” said the senator.

The bill, which was introduced last year as SB1182, has been reintroduced this year as SB3, which is an increase in priority; the bill is behind only the state budget and a pension reform bill.

SB3 currently has 26 cosponsors, including 12 Republicans and 14 Democrats, within the state Senate. It also, as Stack explained, has a fair amount of approval from the governor.

“Governor Wolf is on record already as saying that if a bill like this got to his desk, he would sign it,” said Stack.

Medical cannabis could be used for a variety of medical problems, including cancer, pain management and epilepsy, as Lolly Bentch Myers and Dana Ulrich, both mothers of young children suffering from epilepsy, spoke about.

Both mothers detailed their experiences with daughters who suffer from hundreds of seizures a day, both day and night. The children have been through numerous procedures and prescriptions, all of which have failed to control the epilepsy.

Medical cannabis would help control the seizures, as Myers evidenced from a story told to her by a family struggling with similar circumstances. The family was moved to illegally purchase and administer cannabis to their daughter. The move began effectively controlling, and eventually stopped, the seizures.

One problem with passing legislation is the stigma which surrounds cannabis, which is classified as a Schedule 1 drug.

“If this medicine was a derivative of any other plant, it would be in every CVS in the country,” said Leach.

If the proposed bill is passed, however, it would be important to “maintain openness of administrative form,” said Dr. Jahan Marcu, director of research and development at Green Standard Diagnostics.

On the subject of SB50 and industrial hemp, Schwank described the possibilities for test plots of industrial hemp throughout the state by private farmers, similar to the system recently adopted by Kentucky.

This would be a way to boost agriculture in the state through a return to the past.

Les Stark, the author of “Hempstone Heritage,” spoke about the storied history of the hemp industry in Pennsylvania. It was once a staple crop within the state and advocated by William Penn and early state governments. Hemp helped farmers stay “largely self-sufficient in all areas of life,” Stark said.

The original township of Hempfield, in Lancaster County, takes its name from the crop, which the author said “was an epiphany.”

The state’s hemp was considered the “finest in the world,” he explained, and was used for countless purposes such as paper, sails, rigging, clothing, flammable oil and feed.

“If our ancestors, in an intelligent, civilized yet more primitive condition, could raise this tremendous industry from the soil of the fields they toiled with horse and plow, then think of the possibilities now,” he said.

Erica McBride of the Keystone Cannabis Coalition, spoke next, speaking further of the modern possibilities for hemp and the difference between hemp and marijuana.

“The reality is that hemp is grown and harvested quite differently than marijuana,” said McBride, who noted that “hemp fields would actually be a deterrent to marijuana growth.”

This is because of a cross-pollination that would occur, affecting the marijuana plants. Industrial hemp growers would also be licensed.

McBride also noted hemp’s use as a rotation and cover crop, and its ability to restore soil health and remove pollutants while also acting as a cash crop.

What this would mean for farmers and the state is not only cleaner land but one with more jobs, venture capitalism, and revenue, Stark argued.

“We will create jobs. We will help save the family farm, and we will put the hemp back in Hempfield,” said Stark.

“It’s time to stop talking about it and start bringing back the heritage of our past, and turning it into the hope of our future,” said McBride.