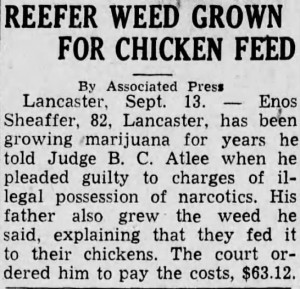 On July 5th, 1938 old man Enos Sheaffer found himself in a terrible mess. It was all a misunderstanding. How in the world did an 81 year old man get locked up in jail for growing a newly forbidden plant?

Enos was a farmer who lived most of his life in the heart of Lancaster County in Leacock Township. Now he was living at 574 New Holland Avenue in Lancaster City. He had a long strip of hemp growing alongside his garden.

Meanwhile the state had started a new drive to eliminate “reefer”. Harrisburg put out the call in a declaration of “war on marihuana”. The city of Lancaster was in the crosshairs because it was said to be a place where the smoking of cannabis was well known.

A young man was arrested in Lancaster selling cannabis at a local dance hall. Investigators started scouring the city looking for sources of supply. Enos didn’t know about any of this. He may have heard that Pennsylvania banned “marihuana” when Governor Gifford Pinchot signed the bill on May 22, 1933. He may have heard that the federal government banned it on August 2, 1937. But he certainly made no connection to the crop he was growing in his garden or he would not have grown it so blatantly and openly.

Undercover police came to Sheaffer’s garden but Enos was not at home. They started pulling up the plants and when they were about half way done they got word that he was found at a local tavern. They went in and found him and asked him, “Are you Enos Sheaffer?” Enos answered that yes, it was him. They told him that they had just walked by his property and saw someone making away with all his plants. 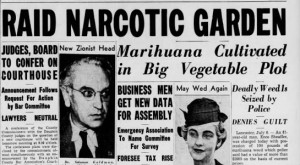 Enos was much alarmed and jumped up and followed the men to his home where they asked him if that was his garden and those were his plants. He said that they were his and the men immediately placed him under arrest.

Sheaffer admitted to growing the crop but said that he had no idea whatsoever that it was illegal. As far as Enos Sheaffer was concerned, he was growing hemp and he was growing it for seeds for his chickens to eat.

A few months later Enos went to trial where he told the judge that he had grown hemp all of his life and that his father had grown it before him. He was raised with this crop and they both used it for seed to feed their chickens.

Enos was not the only one. Farmers across the state found themselves in the same situation, having to explain that they were growing hemp for legitimate purposes and not growing “marihuana”.

The world must have seemed turned upside down. “How did this happen?” they must have wondered. Hemp was grown in Pennsylvania from 1681 until the late 1930’s. Between 1720 and 1870 there were more than 100 water-powered mills for processing hemp fiber in Lancaster County alone with dozens more in all the surrounding counties and hundreds throughout the state.

Sheaffer’s ancestors grew hemp in Lancaster County for nearly 200 years. Up until the 1840’s they used it to make clothing and sold the excess on the market for rope and other uses. After 1840 they continued to raise it for livestock feed, as did many farmers throughout the state. 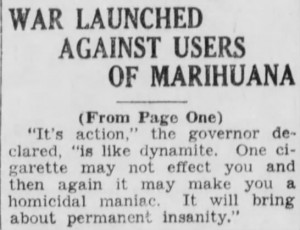 Over the years the zeal with which the state and federal officials waged the war on “marihuana” effectively crushed an industry and wiped from our memory all knowledge of this crop and it’s deep and rich history in the state.

One thing we know for sure is that today’s strains of industrial hemp contain a THC content of 0.3% and can NOT be used to smoke and get high with. Industrial hemp simply is not “marijuana”.

Correction of a Misunderstanding 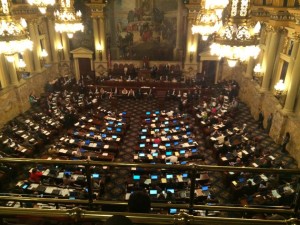 On July 5th, 2016, the Pa. House of Representatives is expected to give final approval to HB967, the Pennsylvania Industrial Hemp Act introduced by Representatives Russ Diamond and Marty Flynn. It was the companion bill to the hemp bill introduced into the state senate by state senators Judy Schwank and Mike Folmer.

It is fitting that the hemp bill will be passed on July 5th, the anniversary of the arrest of Enos Sheaffer shortly before his 82nd birthday on July 5, 1938. It signals that the misunderstanding is over. The government of Pennsylvania now officially recognizes the difference between “marijuana” and hemp. We won’t be arresting 81 year old farmers anymore.

Something else will happen on July 5th, 2016. Harrisburg City Council will vote on an ordinance to decriminalize cannabis. It signals that the city is seeking to correct the misunderstanding of reefer madness. They are moving away from the previous punitive approach and are leading the way for statewide decriminalization of cannabis.

Pennsylvania citizens have put up with this sickening madness of throwing people in jail or wrecking their lives over a plant for too long. We corrected the misunderstanding concerning medical cannabis and industrial hemp. We will open their eyes to the colossal failure of cannabis prohibition.

Governor Wolf is expected to sign the hemp bill into law by 7/11 one week after the celebration of the Declaration of Independence. It is too late to get seeds in the ground this year but the Department of Agriculture will have the better part of a year to get the program up and running for next year. One year from now dozens of farmers will be growing hemp and within a couple years hundreds and in following years thousands of farmers growing hemp again, just like in the old days. 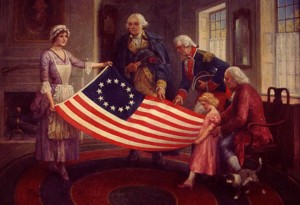 This is the week of our Independence. A new day is dawning in Pa. We welcome hemp back to the fertile soils of Pennsylvania, back to Lancaster County and we look forward to putting the HEMP back in HEMPFIELD!